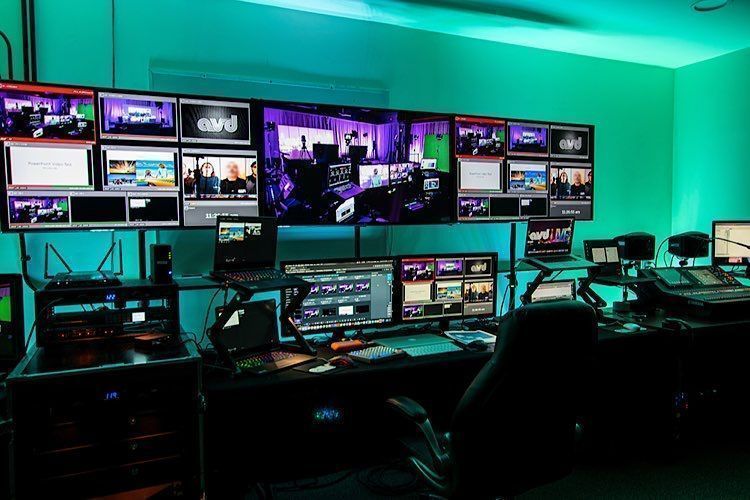 Audio Visual Dynamics (AVD) has put its new Analog Way Aquilon RS1 video processor to innovative use as the company and its corporate clients transition to virtual environments due to the COVID-19 pandemic.

Based in Hackettstown, New Jersey, AVD organizes and executes all of the technical audio and visual aspects of key corporate meetings and trade shows.

“When COVID-19 put an abrupt stop to live corporate events we started building streaming studios in our warehouse using the inventory of equipment we have for shows,” explains Tim Burke, AVD’s Head of Video Operations who hails from broadcasting. “We now have three scalable studios, which can handle multiple streams at once, plus a control area.”

The Aquilon was a recent purchase and had been used on half-a-dozen shows before the pandemic. So while the warehouse studios were being built to COVID-19 compliance standards, Burke began exploring the Aquilon from home accessing the processor via Analog Way’s Web RCS software user interface.

“I started playing with it and programming with it and realized that we could use the Aquilon for master control in the streaming studios. It was the perfect solution! The Aquilon RS1 is essentially a 12 M/E switcher, with a level of control and operability you don’t find in broadcast switchers. It can handle multiple layers and complex content, and many people working remotely can log onto it at the same time.”

During the downtime Burke began to train employees on the Aquilon via Zoom. “It was the perfect opportunity to show them all the things the Aquilon can do,” he says

The AVD warehouse reopened with one main and two smaller streaming studios or “pods,” which are configured like conference breakout rooms. “Each pod comes with a crew: a producer, switcher operator, graphics operator and audio operator. There are hard lines to the Aquilon in the control room and return lines back so we can see what’s ‘on air,’” Burke reports.

The Aquilon has already played a key role in several virtual corporate projects. AVD streamed a corporate conference for a financial services client who wanted three simultaneous streams for 400 attendees. “They started with a general session then pushed attendees to three breakouts, all concurrent and very complex,” says Burke.

AVD’s three pods were used for the breakouts, and each featured a six-person panel on Zoom. But instead of using Zoom to control the panel presentations, AVD used the Aquilon to crop and pick the windows the producer wanted to see from the preset gallery of panelists they built. “The Aquilon highlighted that person, brought them up, muted everyone else and let panelists know who was next and got them ready for their cue,” Burke explains. “I controlled this by live switching via Aquilon; we didn’t have to rely on Zoom.”

In addition, each panel’s audio came into the Aquilon as Dante, was sent to the Yamaha QL5 in master control, mixed and sent back out to the pods. “Even the input names on the Aquilon translated to the Dante names,” Burke notes.

A second project, a sales awards show for a specialized nutrition company, took a hybrid approach to production. The emcee talent was on set in one of AVD’s pods with an LED videowall driven by Aquilon while the company president appeared live on Zoom from a remote location. Using Aquilon as a broadcast switcher, AVD created PIPs of the host and president layered against background graphics and with lower-thirds. The host could view the Zoom output on the downstage monitor promoting a conversational interaction. Videos of the nominees were rolled in as the host announced the various award categories and the winner of each.

“We’re so pleased that the versatility of the Aquilon has allowed AVD to pivot and host virtual corporate shows and events,” says Seth Teates, Regional Sales Manager for Analog Way. “This is an extremely innovative and impressive use of Aquilon – a use AVD never intended when they purchased their Aquilon”

Burke notes that “we’re writing the book as we go” and as corporate clients transition to virtual environments. He believes that even when the world returns to pre-COVID normality “we’ll be feeding a lot of breakout rooms and will need a multi-output switcher to control all the content. And no matter how much live work we do we’ll still be streaming regularly.”

Launched in July, Analog Way’s Simulator for Aquilon enables a user to simulate the processor on their Mac or PC so programming, testing and uploading can be done remotely without access to the system. Simulator is available as a free download from Analog Way’s website.