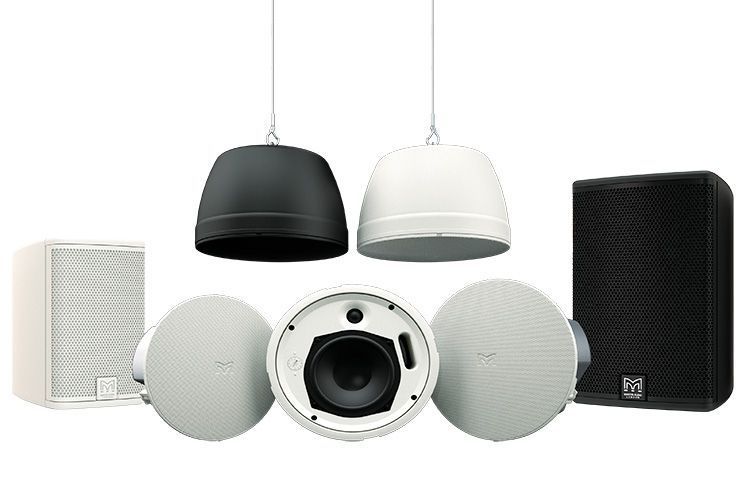 Martin Audio’s busy start to the year sees no sign of slowing down with the announcement of a further five new products targeting commercial installation sector with in-ceiling and pendant loudspeakers joining the ADORN series.

The ADORN commercial series of on-wall loudspeakers was first introduced in 2019. This has now been expanded by three in-ceiling loudspeakers and the company’s first-ever pendant speaker, available in white or black as standard.

With Martin Audio’s signature sound characteristics, the ADORN series is the perfect choice for background and foreground systems that require superior sound quality from visually discreet, ultra-compact enclosures. They also provide a seamless sonic transition within a multi-zone complex using larger Martin Audio systems such as CDD or BlacklineX.

All the new ceiling models have a nominal impedance of 16 ohms, enabling four or more speakers to be driven in parallel by one amplifier channel, thereby maximising efficiency and minimising cost. The new ceiling additions are also fitted with an internal high-quality 70V/100V multi-tap line transformer with a switch to select the output level. For full-bandwidth protection, the low and high frequency sections are individually protected against overload in all models.

Comprising a 4” (100mm) LF driver and a 0.75” (19mm) silk-dome tweeter, the ACS-40TS in-ceiling speaker produces 108dB peak output at 1 metre and its ported design delivers strong bass that extends down to 73Hz. The very wide 180° conical coverage of the ACS-40TS makes it particularly suitable for low ceilings and reduces the number of speakers required for even coverage — leading to a reduction in installation cost.

Featuring a 5.25” (100mm) LF driver and a 0.75” (19mm) silk-dome tweeter, the ACS-55TS in-ceiling speaker produces 113dB peak output at 1 metre and its ported design delivers strong bass that extends down to 79Hz. The wide 150° conical coverage of the ACS-55TS makes it particularly suitable for low ceilings and it features a shallow backcan for installation in ceilings with a minimum cavity depth.

Finally, the ACP-55T pendant speaker features a 5.25” (100mm) LF driver and a 0.75” (19mm) silk-dome tweeter, produces 109dB peak output at 1 metre and delivers superb sound quality for both music and speech reproduction. Its stylish pendant enclosure is equipped with a single-point mounting system plus provision for attaching a safety cable.

Available in black or white, it also features a wide 150° conical coverage

Summing up, Managing Director Dom Harter said. “These latest announcements mean we have announced ten new products for different markets and applications since the turn of the year. New product development is the lifeblood of our rapid growth in the last three years and we are continuing with that winning strategy in 2020. I’m delighted with this range of ceiling speakers, in particular the company’s first pendant speaker, and I believe that the extended ADORN series is a formidable value proposition for the worldwide commercial market.”

The ADORN series will be on show at ISE on stand K190 in Hall 7 and you can hear the new ceiling line in the Martin Audio demo room – E104, near Hall 10.